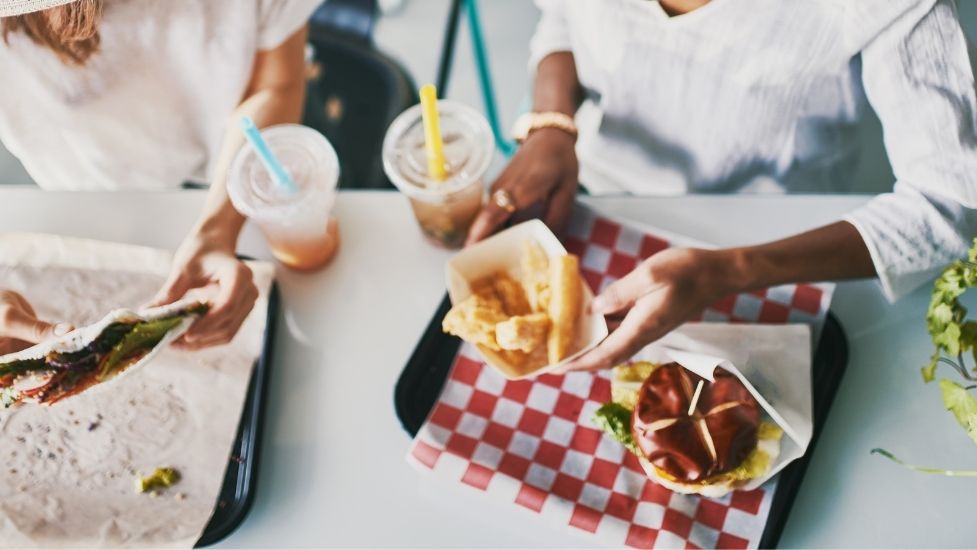 5 vegan restaurants in and around Mile End

Gone are the days where the only vegan options on the menu were side salads and chips.

N﻿ow﻿ plant-based restaurants are popping up everywhere, and the great thing with these places is you don't just get the odd 'accidentally vegan' ﻿options, ﻿but the whole menu.

Vegan food is now the fastest-growing takeaway, ﻿so if you're doing Veganuary this year you'll be spoilt for choice.

To help you narrow down your eating-out options, we've put together a list of some of our favourite Vegan Eateries that aren't too far from ﻿the QMUL campus.

Based in Hackney Wick's Colour Factory food court, The Hogless Roast is a 100% vegan food stall that specialises in﻿ 'hogless' vegan rolls ﻿which are essentially roast dinners in a brioche bun. ﻿﻿The company uses plant protein, infused with smoky BBQ flavouring to recreate an animal-friendly version of the traditional 'pork bap'. ﻿

But vegan buns﻿ aren't all that's on offer! The Hogless Roast also serves a range of sides including vegan mac N' cheese and mini hashbrowns.

You can get to the Colour Factory in around 20 minutes on public transport, or if you don't fancy eating out, you can collect your food, or place an order on Deliveroo.

Take a look at their menu here.

All Nations Vegan House is a ﻿restaurant and takeaway that celebrates﻿ healthy, hearty Caribbean cooking.

﻿Not only is the food vegan, but it's also good for you and the environment! Restaurant owner Atreka Cameron launched the restaurant in 2017 and has been committed to serving food made from organic, ethically sourced ingredients﻿, ﻿whether that's for the delicious ﻿jackfruit curries or the plantain chocolate cakes.

On public transport, you can get to All Nations in around 30 minutes, so it﻿ is a little further out than most of the restaurants on this list but is definitely worth the trip.

Loveshack is a little bit of everything. It's basically a vegan restaurant, that also doubles as a cocktail bar, music venue, and as restaurant owners put it, 'an escape from London life'.

﻿With vegan small plates, desserts, 'fish' plates, and tons of smoothies and juices there's plenty of veggie options to choose from, so there's no reason to miss out on all your cravings this veganuary.

You can get to Loveshack ﻿in around 15 minutes on public transport.

Take a look at their insta here.

Based in Benthal Green, at Young﻿ Vegans﻿ you can get, yep you've guessed it, a whole lot of vegan pizzas. Toppings include things like,﻿ ham, Nduja, pepperoni and chicken- all vegan alternatives of course!

But there are some other vegan-friendly options including also pies, mac and cheese and 'mozzarella' dippers. ﻿

﻿ Sazzy and Fran is a vegan bakery and cafe﻿ 15-minutes from the QMUL campus. The cafe itself is filled with greenery and makes for the perfect cosy brunch spot.

Owners, Sazzy and Fran, opened the cafe with the intention of making good, plant-based food and vegan coffee easy to find and there's always a ton of sweet and savoury treats on the menu.

You can choose from vegan croissants, cinnamon swirls, brownies and banana bread﻿. You can even get Coffees with vegan 'milk' for no extra charge!

Vegan dining has never been easier, so there's no excuse not to give Veganuary a try.

Or, if you don't feel like doing a whole month﻿, there's no harm in going for a meat-free meal every now and then!﻿

Security Updates from the Whitechapel Campus

Looking for storage for your stuff?

Leaving us in June? We need your help!